GEOLOGICAL REPOSITORY FOR RAW AND SNF

The waste, which does not meet the criteria for disposal in the National Radioactive Waste Repository in Mochovce, and the spent nuclear fuel are stored in the Integral (long-term) Storage Facility, or in the Interim Spent Nuclear Fuel Facility in Jaslovské Bohunice. The final disposal in the deep geological repository is currently considered to be the most suitable and at the same time the only technologically feasible solution to the back-end of the nuclear cycle.

The National Policy for the Management of Spent Nuclear Fuel and Radioactive Waste in the Slovak Republic (2015) proposed two options regarding the management of spent nuclear fuel (SNF) and radioactive waste which cannot be disposed in the National Nuclear Waste Repository in Mochovce (so called „dual approach“):

A deep geological repository (DGR) refers to a nuclear installation used for disposal of spent nuclear fuel and radioactive waste. It is located underground (usually more than several hundred metres beneath the surface) in a stable geological formation, which ensures long-term isolation of radionuclides from the biosphere. Its construction and subsequent operation take decades and the programme for the development of the DGR in Slovakia is still in its preparatory stage.

History of development of Deep Geological Repository in Slovakia

The first studies on the subject of the deep geological repository in the former ČSFR had already been performed at the beginning of the 1990s. Shortly after the establishment of the Slovak Republic, between 1996 and 2001, the project for the development of the deep geological repository in Slovakia was implemented, under the supervision of Slovenské Elektrárne. The most important output of this was selection of 5 prospective localities based on the multicriteria analysis of the geological environment of the whole territory of Slovakia. Localities for nuclear installations and localities for exploratory purposes regarding the repository siting in the Slovak Republic are depicted on the map of basic geological structures: 1- Tríbeč, 2-Veporské vrchy, 3- Stolické vrchy, Rimavská kotlina, 5- Cerová vrchovina. 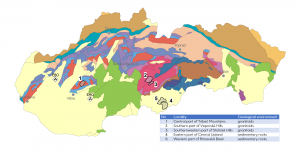 The total costs for the Slovak programme for the DGR development amounted between 1996 and 2001 to approximately € 2.6 million. The management of Slovenské Elektrárne, a. s. suspended the programme in 2001. This state remained practically unchanged until 2012.

In 2010, the company JAVYS, a. s. became an implementor of deep disposal in the Slovak Republic and restarted the programme for development of the DGR in the SR. Over the past few years, the locality selection criteria have been reviewed, a feasibility study of the DGR in Slovakia has been updated, recommendations concerning public relations have been developed, and last but not least, plans for further stages of the DGR development programme have been elaborated. From 2017 to 2018, the programme for development of the DGR continued through the project of “geological task” with regard to the two most prospective localities. The project included detailed research and development plans as well as economic stimulus proposal intended for the chosen localities. Between 2013 and 2018, the National Nuclear Fund provided € 0.4 million for the DGR project.

In 2017, the total costs for development of the DGR in Slovakia amounted to between € 2 700 – 3 600 million depending on the length of nuclear power plant operation and geology of the host environment. Such resources are accumulated in order to fund activities necessary for all stages of the DGR development. The contributions of nuclear installations for the DGR project are proportionally distributed according to the amount of spent nuclear fuel and radioactive waste, which is/will be disposed in the DGR.